A Warhol screen-test subject watches her celluloid debut for the first time. 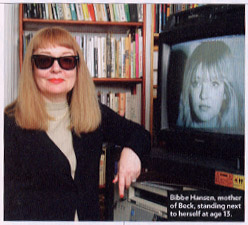 "Look at that baby!" says Bibbe Hansen, reaching out to touch her own cheek on a television monitor. On the screen it’s 1964, and Hansen is sitting before Andy Warhol’s lens for her first screen test. Asked to stare directly into the camera for three minutes, she doesn’t once lose her composure. Her face is impassive, but her eyes are seductive beneath long, blonde bangs. She’s 13.

Forty years later, Hansen—daughter of Fluxus artist Al Hansen, mother of Beck, and, in her youth, one of the youngest members of the Factory crowd—tries to mimic the pose but can’t keep from smiling. This is the first time she’s seen her screen test, and it’s like watching an old home movie that happens to have been shot by Andy Warhol.

Hansen has come face-to-face with her youth courtesy of Callie Angell, adjunct curator for the Andy Warhol Film Project at the Whitney Museum, who is working on the first catalogue raisonné of Warhol’s films, slated to be published in 2005. One of the two volumes will be devoted to the 506 screen tests Warhol shot of Factory visitors in the mid-sixties (a few were shown at MoMA last summer). While a number of famous faces—Bob Dylan, Dennis Hopper, Lou Reed—appear in these silent portraits, Angell became fascinated by the lesser-known subjects and tracked them down to record their stories. "They’re so concrete as human presences in front of you," she says of the tests. "You have this sense of lives that continued past your point of knowing about them."

Some of the subjects have made the trip to Angell’s office to see themselves through Warhol’s eyes. Joe Campbell, a retired land surveyor known in his Factory days as Sugar Plum Fairy, was disappointed with his looks in the film. "We have in our mind’s eye memories of what we once were," says Campbell, who was by all accounts a very handsome young man. "And these images are kind of a comeuppance."

Fred Kraushar, son of Pop Art collector Leon Kraushar, flew in from Oakland to see the test of his older brother, Howard, a Factory visitor who later committed suicide. "I don’t have a lot of physical memories of my brother, not a lot to hold on to," he says. "So seeing this was very moving."

For Hansen, now an actress and writer in Los Angeles, the screen test opened a window onto her unusual adolescence. She recalls meeting Warhol in 1964 when her father took her to Stark’s coffee shop, where the art crowd gathered on Saturdays after gallery-hopping up Madison Avenue. "And what do you do?" Warhol asked her. Her father piped up proudly, "I just sprung her from jail."

Hansen was a New York City street kid in those days—shoplifting, skipping school, and consuming more speed than food, pastimes that landed her at the Spofford Youth House, a juvenile prison in the South Bronx. A Lolita in lockdown? Warhol, of course, was captivated. He invited Hansen to make a movie about her experience. The next year she would star in Prison, in which she and Edie Sedgwick trade tales about how they landed in the joint.

"My recollections of the Factory are those of a child," Hansen says. "I was broke and hustling. Then I’d go to Andy’s, and he’d be going to lunch in wonderful restaurants, out to nightclubs. And all the women were dressed so beautifully." The glamorous grown-ups took her in—Sedgwick giving her makeup, Gerard Malanga entertaining her schoolgirl crush, Warhol finding her places to stay. Compared with the rest of her life, the Factory was a safe haven. But her time there was short-lived, as Hansen wound up back in reform school, remaining until just before her 18th birthday. She later got involved in the L.A. punk scene after getting married and having two sons.

Hansen turns back to her screen test as the 13-year-old begins to disintegrate in a blur of splotches. "The child looks so delicate and fragile, but there’s a hardness," she says. "I was so much older then. I’m younger than that now."

Missing Persons: Andy Warhol Film Project curator Callie Angell has searched high (Warhol's time capsules) and low (Google) for clues to the identities of the most obscure screen-test subjects, but these ten have her stumped. If you can identify any of the people in these film stills, e-mail her at warholfilms@whitney.org. (Photo credit: © 2004 The Andy Warhol Museum)